Sometimes I like to head out with the camera in my lap and no destination in mind. Most of the time heading to country roads. Meandering (I like that word.) I turned down one road looking for old barns or houses but found instead something I have wanted to catch with my camera in the past.
A crop-duster in action. He put on a show. 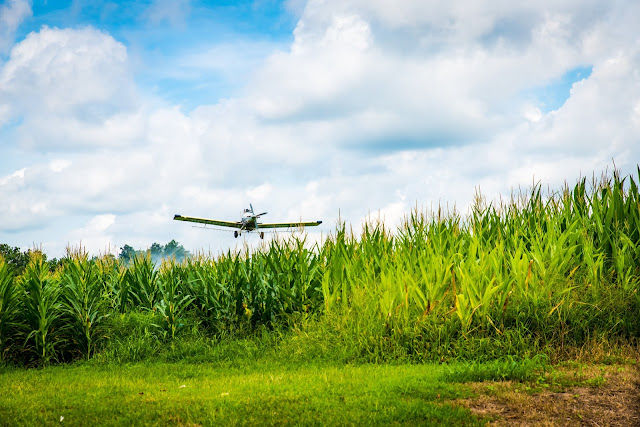 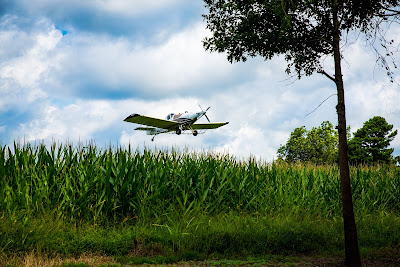 The corn was high and covered the  whole hillside. 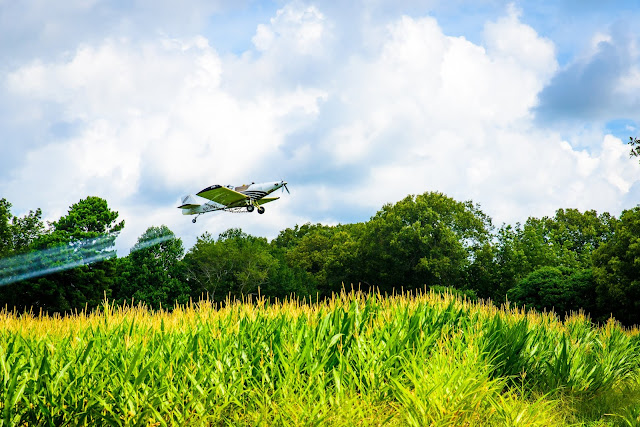 Love finding something like this on the back roads.

Posted by Brenda at 4:30 AM No comments: 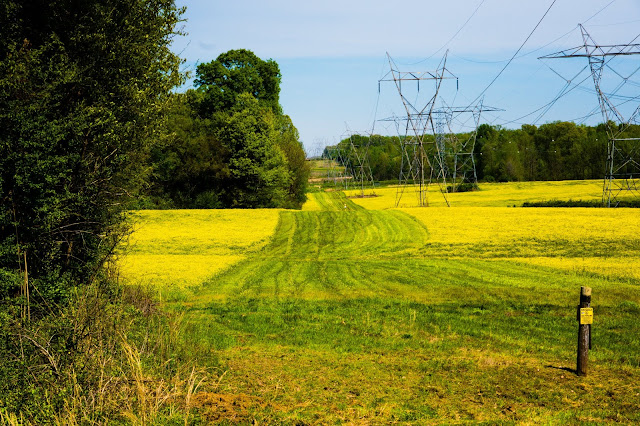 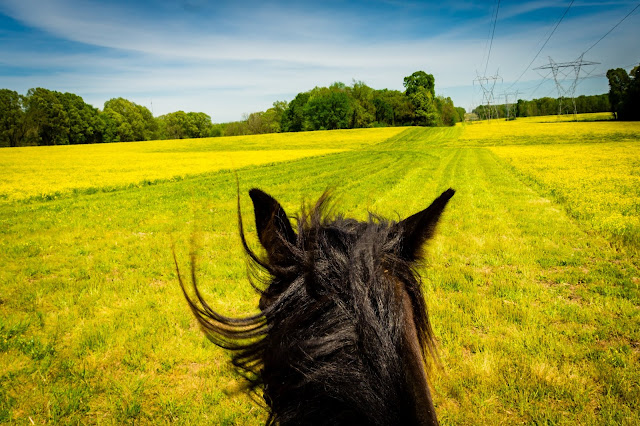 Yesterday was so beautiful I decided to ride Shiloh to take some pictures of a beautiful field of yellow flowers (weeds). As I saddled up I heard a sound I hate. A large tractor coming down the road clearing the ditches. He went by and i was thankful I wasn’t on the road. But I had to make the 1/2 mile ride up the road before he came back. I made it to my turnoff just as he was coming back.  Thank you again Lord. I was coming out of the woods to ride the power lines and heard another noise. Two large tractors were cutting my path down the power lines.  My quiet ride wasn’t so quiet. I rode around till they got through but suddenly Shiloh was getting more and more upset and wanting to go. I worked with him then realized my large camera was hanging down on his flank and hitting him every step he took. So I had been telling him to slow down and something else telling him to go. Poor horse with a dumb rider. But it was worth it to see the field with the green path down the middle.
I finished the ride with a few pictures of some old cars in a yard.
Good horse, good ride. 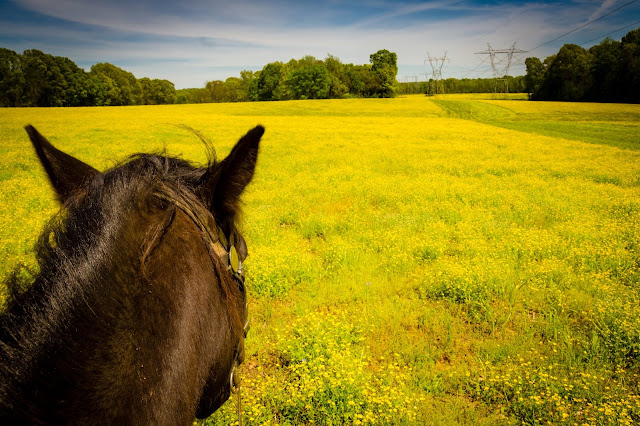 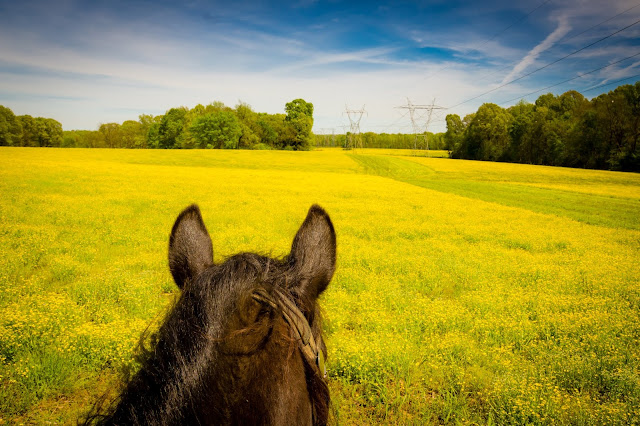 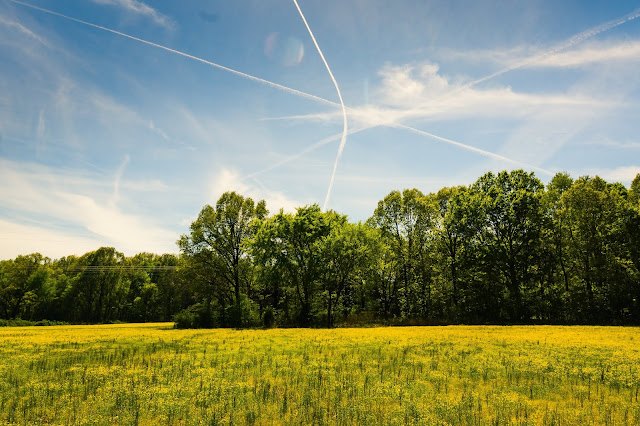 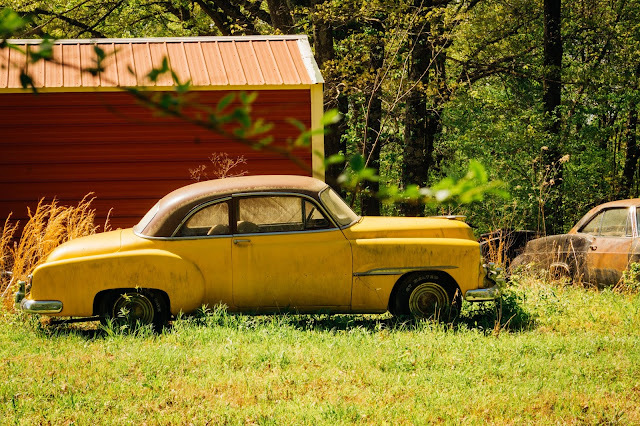 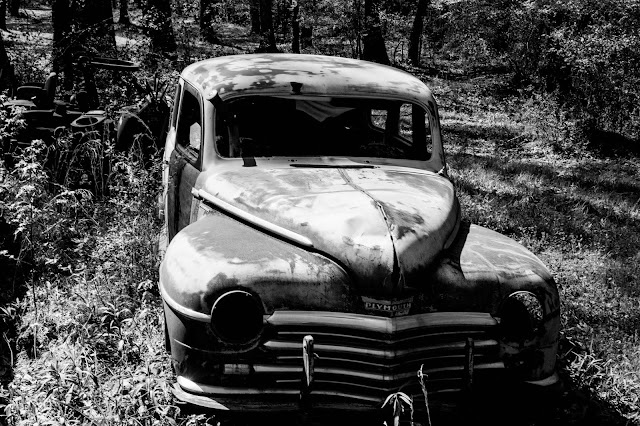 Posted by Brenda at 4:37 AM No comments: 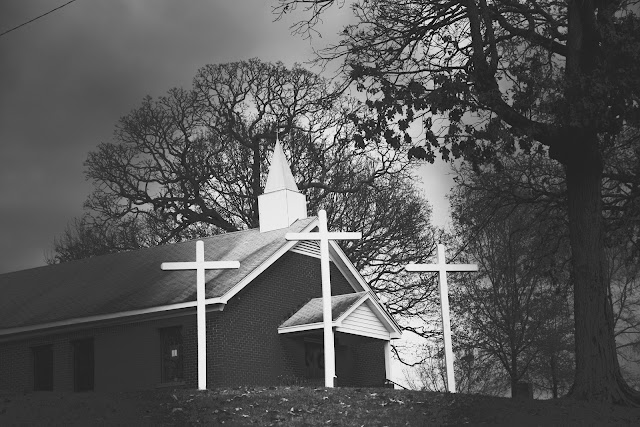 From Max Lucado's book-Fearless--What did Jesus do with the doubters in the Upper Room. Luke 24:27 "And beginning with ones and all the Prophets, he explained to them what was said in all the Scriptures concerning himself." A face to face, put your hand on my wound visit. A meal is served, the Bible is taught and the disciples found courage.
What would Christ have us to do with our doubts? His answer, touch my body and ponder my story. We still can, you know. We can still touch the body of Christ. When we brush up against the church, we do just that. "The church is his body; it is made full and complete by Christ, who fills all things everywhere with himself." (Eph. 1:23) May others brush up against us and see Jesus!
Posted by Brenda at 5:22 AM 1 comment: 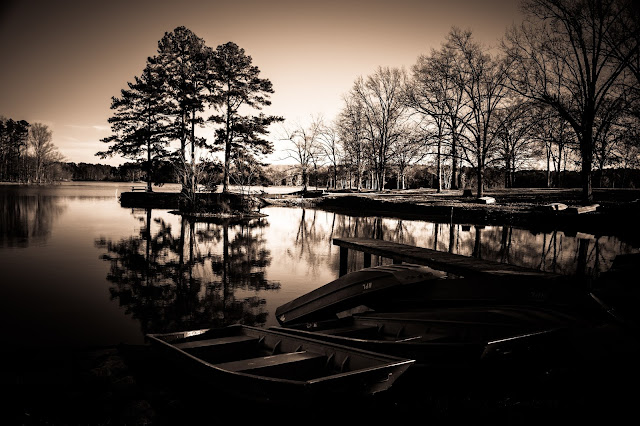 Peter and his storm riders knew they were in trouble. “in the middle of the sea, tossed by the waves.” Apt description, perhaps for your stage in life?” The disciples fought for nine hours. Then about 4 AM the unspeakable happened. “They spotted someone coming on the water.” They didn’t expect Jesus to come this way. Neither do we. We expect to see Him in peaceful hymns or Easter Sunday or morning devotionals.

But it is in a storm that He does His finest work. For it is in storms that He has our keenest attention. Jesus replied to the disciples’ fear with an invitation worthy of inscription on every church cornerstone, “Don’t be afraid, Take courage, I am here.”

We cannot go where God is not. Look over your shoulder, that is God following you. Look into the storm; that’s Christ coming toward you. Much to Peter’s credit, he took Jesus at his word. “Lord if it is You, command me to come to You on the water. So He said, Come. And when Peter had come down out of the boat, he walked on the water to go to Jesus.”

Peter never would have made this request on a calm sea. Storms prompt us to take unprecedented journeys. For a few historic steps and heart stilling moments, Peter did the impossible. He defied every law of gravity and nature, he walked on the water to go to Jesus.

”When Peter saw that the wind was boisterous, he was afraid, and beginning to sink he cried out, saying, Lord, save me! Peter shifted his attention away from Jesus and toward the squall, and when he did, he sank like a brick in pond. Give the storm waters more attention than the Storm Walker, and get ready to do the same. Whether or not the storms come, we cannot choose. But we can choose where we focus during a storm. “We must pay much closer attention to what we have heard, so that we do not drift away from it.” Heb. 2:1.

Do what it takes to keep your gaze on Jesus. Feed your fears, and your faith will starve. Feed your faith, and your fears will. Lam. 3:22-23 “Because of the Lord’s great love, we are not consumed, for his compassions never fail. They are new every morning, great is your faithfulness. I say to myself, the Lord is my portion, therefore I will wait for Him.”

The storm didn’t cease. “Lord, save me!” Peter cried. Immediately Jesus reached out his hand and caught him. “You of little faith, why did you doubt? And when they climbed into the boat, the wind died down.” Jesus could have stilled the storm hours earlier. But He didn’t. He wanted to teach the followers a lesson. Jesus could have calmed your storm long ago too. But he hasn’t.  Does he also want to teach you a lesson. Could that lesson read something like this, “Storms are not an option, but fear is?”

His lesson is clear. He’s the commander of every storm. Are you scared in yours? Then stare at Him. Remember the words, “I am here."

Making a Memory in Memphis 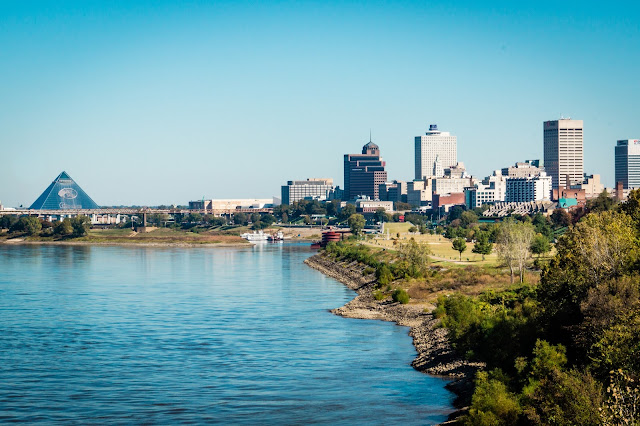 I enjoy spending a day in Memphis and acting like tourist. We went with another couple downtown to take pictures and walk around. Beautiful day with temps in the seventies. 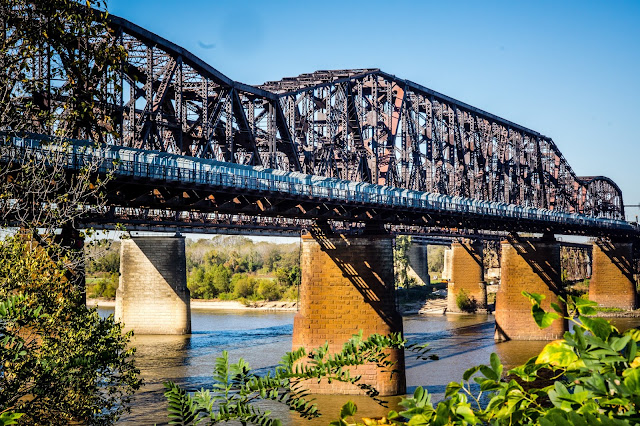 Started off walking across the Mississippi River and back on the new walking bridge. I think a mile and half each way. 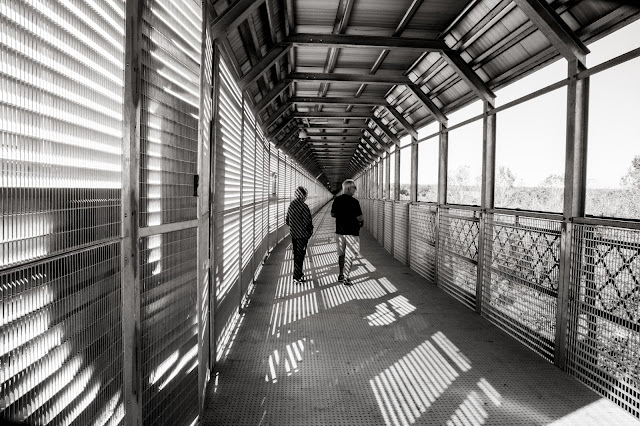 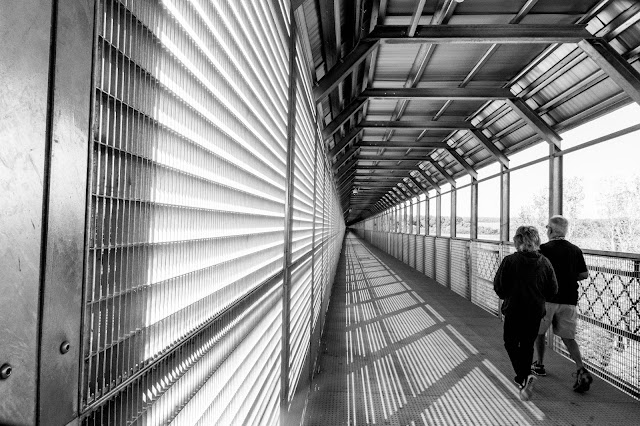 Then lunch at Flying Fish and walk about the Peabody. We saw a camera crew filming a reality show for Bravo.

Next to a castle I have read about named Ashler Hall. 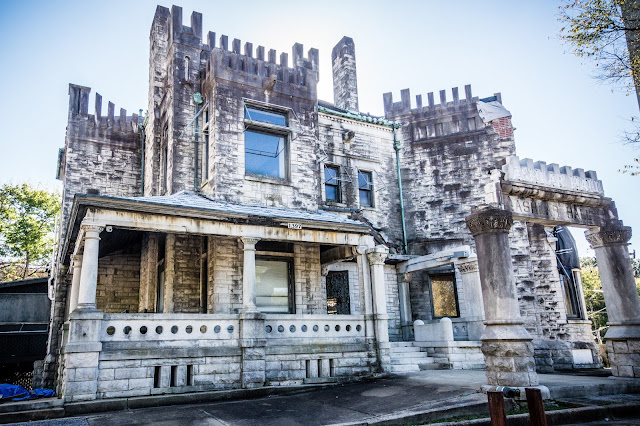 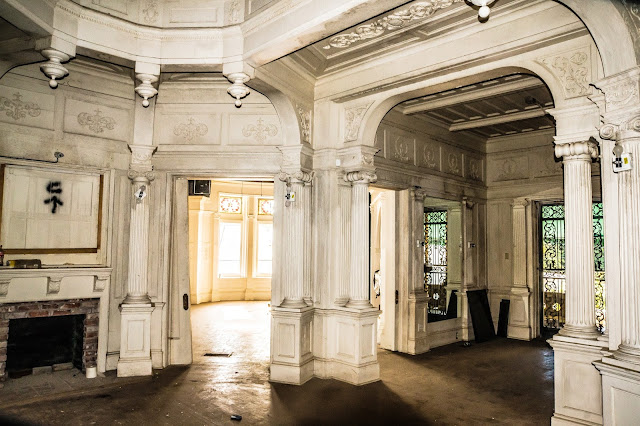 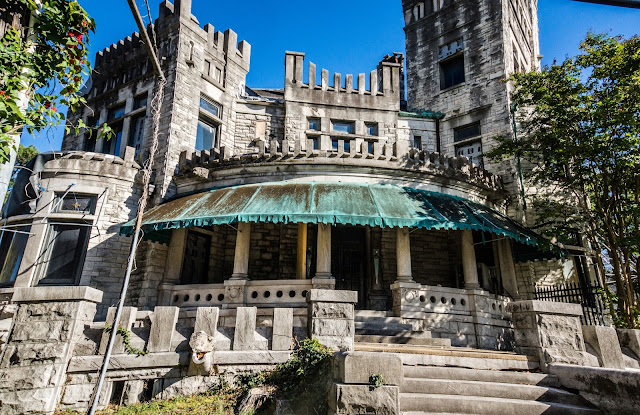 Update on Asher Hall--History: Robert Brinkley Snowden, a prominent Memphis real estate developer, designed this midtown mansion in 1896. Snowden lived in the home until his death in 1942; the property was sold after the death of his wife in 1957. The mansion’s name derives from the term ashlar used to describe a squared, hewn stone. The house passed through the hands of a series of owners including perennial Memphis mayoral candidate Prince Mongo of Zambodia (Robert Hodges), accumulating blight along the way.
In November 2018 the press reported the new owner, Juan Montoya, had made progress in repairing the building. He believed the entire renovation might require as much as $400,000. It was once owned by a man Memphis knew well. Prince Mongo. He claims to be the ambassador of the planet of Zambodia and claims to be 333 years old.  He fits in fine in Memphis. Even ran for mayor and received votes. The castle is now empty and run down. The owner's brother was there and saw me taking pictures outside of the iron fence. He said you can come in for five minutes and opened the iron gates. I guess he was afraid I would get in those gates and take forever. I hurried and got some shots then he said, come in for 1 minute. Got a few shots inside. Very kind man.

Next, we rode through Rhodes College Campus. Beautiful buildings for the very liberal elite. I dared my friend to jump out and say, "How about that Trump winning the election?" And then give a thumbs up. She wisely didn't take the bet. 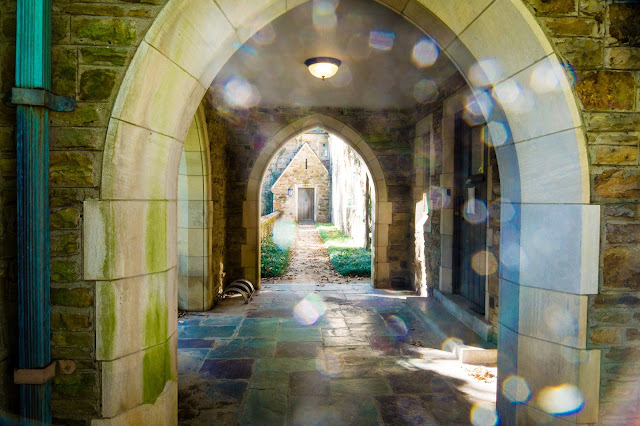 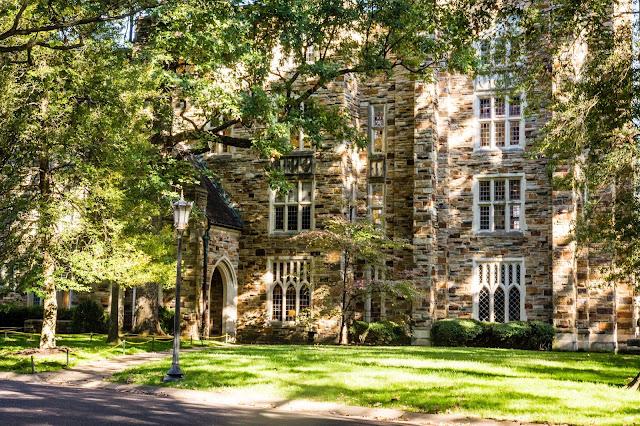 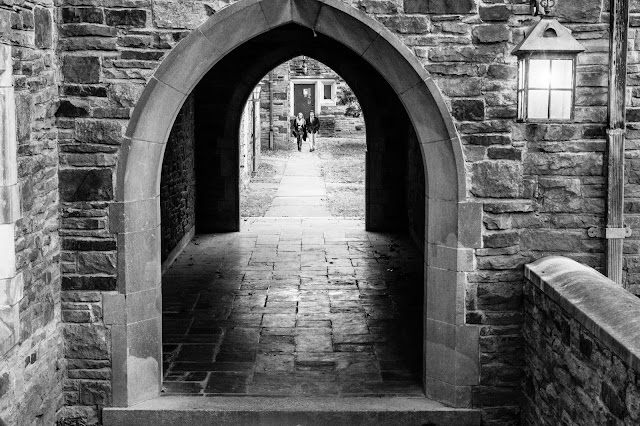 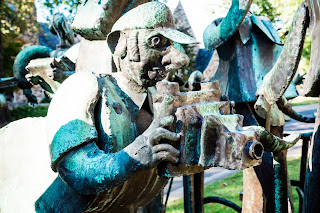 This reminded me of myself.

Next we rode through National Cemetery. Realizing the next day was Veteran's Day, it was a sobering sight to see the lines of graves of those who bravely fought. 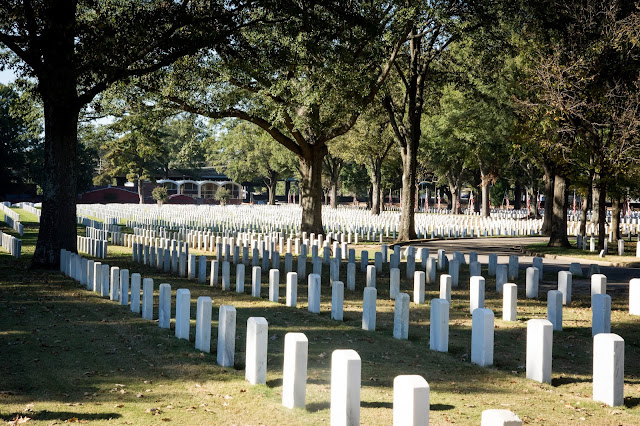 We ended the day at the famous Jerry's for a sno-cone that has ice cream mixed up. It was wonderful. 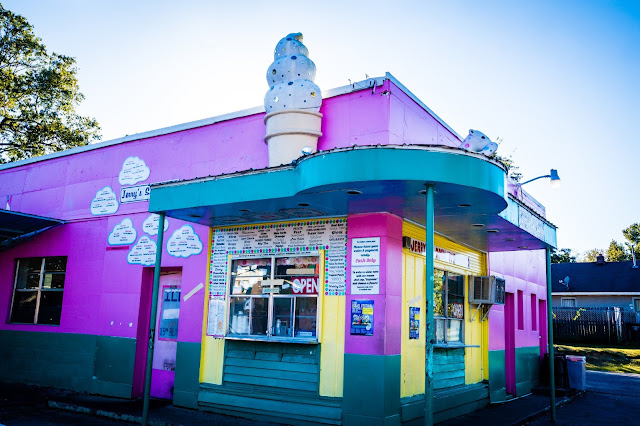 It was the end of a memory making day!
Posted by Brenda at 6:57 AM 1 comment:

“I know that my Redeemer lives, and that in the end He will stand upon the earth. And after my skin has been destroyed, yet in my flesh I will see God; I myself will see Him with my own eyes--I, and not another. How my heart yearns within me!”